Before writing the book I’ve experimented as to how I’d go about sharing my story. At first I decided to write a blog post about the book that inspired me to write about my own experience with cancer. The reception from readers was very encouraging so I decided to dig deeper. This article was originally posted on another blog. I haven’t looked at it since I wrote it so it was interesting for me to read through it once more. The book has a come a long way since then.

Not Fade Away – book review 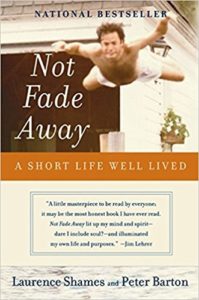 This book has to be one of the most moving ones I read in a while and thought it was worth writing a review with some of my personal reflections as well. The recommendation originally came from Tim Ferriss’ interview on his podcast with Chris Sacca. Chris is a VC but has taken a different approach to the traditional way of doing things and his portfolio includes a number of companies that turned out to be unicorns (his interview and story are worth checking out too).

Back to the book. The story is about Peter Barton whom along with John Malone completely changed the cable industry. Peter was part of the baby boomer generation and accredits his growing up in this era, where kids weren’t pressured to become astrophysicists at age 5, to much of his success in life. He has been an all around bon vivant, musician, self-described ski-bum, Columbia University student, political campaign strategist, working in politics and eventually going to work for John Malone as his right-hand man turning the cable industry inside out and retiring in 1997 at the age of 46 to spend time with his family. Except life had other plans…he passed away in 2002.

He was diagnosed with stomach cancer, which after a while seemed to have been cured, however it unfortunately came back in a terminal version one year later. During the last period of his life Peter got together with writer Laurence Shames to put all of his life and experiences on paper, which resulted in this gem of a book. At first he was reluctant to get involved in this project: “I tried my damnedest not to get involved in the writing of this book, or with a man named Peter Barton, whose life it celebrates and whose death it chronicles. My reason for resisting was simple: My own small existence was on a very pleasant, even keel; I didn’t want to disrupt it by getting close a dying stranger. I didn’t want to think about mortality, still less watch death happening from day to day. I didn’t want to grow to care about a family that would soon be fatherless”. Fortunately for the readers he did get close and wrote this wonderful book.

Instead of going through the whole book I thought to take out a few parts and lessons that stuck with me the most as I was reading it. You can read about Peter Barton’s life in his obituary.

“Funeral Test” (i.e. whoever has the biggest funeral wins)

“The official recognition [of Peter’s achievements] was impressive…and yet it seemed oddly impersonal, beside the point. Peter would have been more pleased, I think, to see the hundreds of friends who rallied around his family. Kids he’d coached, or taken along on his Real World Outings. Colleagues he’d advised and schemed with. Neighbors whose dogs had gotten muddy alongside Peter’s dogs. People he’d skied with, or biked with, or with whom he’d sat around the piano and jammed and wailed. More than fifteen hundred of these friends and colleagues and acquaintances turned out for Peter’s memorial – an event intended not for mourning but for celebration. There was a gospel choir, and a children’s choir in which Kate [his daughter] sang. There was food and wine. There was a stitched together video of Peter’s life, accompanied – of course! – by a rock’n’roll soundtrack. And there were speeches. In keeping with the spirit of the evening, the speakers passed lightly over the subject of Peter sick and dying, still seeking meaning in the face of pain and honest doubt. Instead, they spoke of Peter in his glory. Peter, who believed that nothing was impossible. Peter, who could step into a situation, overwhelmed but never daunted, and master it. Peter who skied too fast, drove too fast, worked too hard, and made it all look easy.”

“Relationships had been one of those aspects of life in which I made things harder for myself, was too feisty for my own good. I’d waffled on commitment. I’d sometimes been unkind by simple inattention, being too wrapped up in other things. I don’t think I’d ever truly let someone into my life. I was also saddled with the odd and macho notion that a man needed different sorts of woman at different ages. […] What I was too dumb to realize, of course, was that if you were lucky enough to meet the right woman, she was all of those things and more – and the two of you evolved together. When I met Laura [his wife] I finally started to understand that. And thank God I did. […] Previously, if there were difficulties, rough patches in relationships, I walked. Now we worked things out. Previously, I did things my own way, by reflex. Now I was willing to pause, to see the wisdom in Laura’s way. It was crucially important to me to get this right, because I had the absolute conviction that if Laura and I started a family, we would stay together forever.”

It’s not all about the money

“It was a messy beginning, but CVN really took of. Within two years it was a billion-dollar business with forty-six hundred employees. But I’m a start-up guy by temperament, and by then I was tired of running it. The only way to make a graceful exit was to merge the company with another recent start-up called QVC. At this point I could finally sit still long enough to consider my stock options. I saw what they were worth – three million bucks, a million and a half after taxes! – and cashed them in at once. Now, some people might say that a million and a half dollars is not a lot of dough, but to me it was that most elusive amount: enough. Enough so that I was confident my wife and kids would be secure. Enough so that everyone would have a home and tuitions would be paid. Enough so that if I dropped dead tomorrow, everyone would be okay. I was over the hump. I could do right as a father. I was thirty-eight when that money came to me. More money has come as money does; it takes on a momentum of its own. But the rest has been Monopoly dough, just a way of keeping score.”

Teaching kids about the world beyond school

“Just as it’s crucial for underprivileged kids to be shown that there are possibilities beyond their neighbourhoods, it’s also important for overprivileged kids to see other sides of life. I didn’t want my kids to grow up in an abstract world of deals and numbers and money that just happened. I wanted them to understand that people worked hard, at a gloriously wide range of things, and that there was dignity in all of them. So I bought a big stretch van – my rolling locker room – and started taking my kids and their friends on what I thought of as Real World Outings. They were like school field trips, but without the onus of school. I was never “Mr. Barton”. I was always Peter. […] Every outing had a theme. “Grease” – where we looked at the realities of fast food. “Garbage” – where we followed the trail of household trash, and of recycled cars and asphalt and concrete. […] Sometimes, at the end of our outings, there’d be the strangest sound in the van: silence. How rare was that? Ten or twelve kids, thinking something over.”

Oh and a practical one about job applications

“As a matter of personal preference and quality of life, I would only work in Boston, San Francisco, or Denver. Well, with all those conditions I was clearly limiting my options. But I did my homework, and I came up with a list of possible employers. I started with a personal Who’s Who of 231 names and sent each of them a letter [offering to work for free for a period]. Amazingly, 123 CEOs responded. For various reasons, that group was gradually whittled down to three possibilities in Denver. There was a hippy tea company and two-cable television outfits. The tea people didn’t really want me, and of the cable companies was already top-heavy with MBAs. That left a dinky little outfit called TCI, which was headed by a seat-of-the-pants, feet-on-the-desk visionary named John Malone. From our very first conversation I realized that Malone was the guy I wanted to work for. He thought huge. He was informal, original, and totally audacious.”

And one last quote in closing

“If I have anything at all to teach about life, it probably comes down to these two simple but far-reaching notions: Recognising the difference between a dumb risk and a smart one, and understanding when you need to change direction, and have the guts to do it.”

The main message for me after reading Peter’s book (and without trying to sound too much of a cliche) is that today is the youngest you are ever going to be. There are many types of lives that we live (some large, some small depending on your definition) but the end is universal, it just comes and you don’t know when. The question is what you want to accomplish between now and then.

I highly recommend this book for anyone interested about life (and death), how to pack a lot into a short life, business and many other topics. Reading this will make you cry, if not then there is probably something wrong with you.

Additionally, here is an insightful interview with author Laurence Shames on his experience of writing this book.